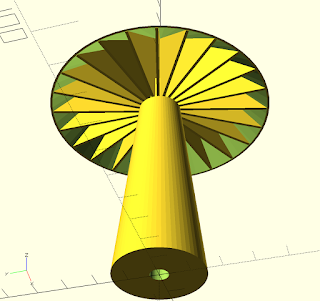 for more details and the Clues - see the page:  2021 Game of Shrooms

you can learn more from the official site:  Game of Shrooms

The Shrooms are Growing!

Posted by Düsseldorf Doug at 8:49 PM No comments:

[This is an older post that did not get published. It describes the last steps taken on Tilt!  This was also part of the motivation for building a gearbox for recycled printer motors.]

After some time with "communication failure", I sorted out some loose connections and got the initial prototype working!  All hail the Cargo Cult Programmer! (need to to write more of a story on this one I think.)

Torque and the Printer motors.  The large gear ratio with the belt pulleys is working. The wheels are turning and it is just enough to suggest that there is an attempt at ballance.  At least this seems to be true in one direction.

12V Testing.  Some testing with the 'power' of the motors or how easy it is to stall the motors is *not* very encouraging. with only small effort, I can stall the printer motor.  This is with 12 volts of power - certainly at the lower end of the rating for these motors.  Attempting more power up to 18V will be worth the test, although my built in battery bank only supports 12v.  (thinking)  18V with a RC battery might be feasible.

18V Testing.  By connecting the robot up to 'shore power' (tether), I bypassed the onboard battery and supplied 18V to the motors.  The robot was a bit more responsive, and the issue became more clear.  Instead of stalling, the motor caused the belt to slip.  In either case, a re-design of the motor-drive-wheel system is in order.

Another aspect is to reduce the gear ratio and see if less torque is an option.  This could be done by printing new pulleys.  but what I sacrifice in torque and gear contact - may manifest undesirable slippage on the pulley. Given the results of the 18V testing, the best option will be to use a gearbox to increase the torque of the wheel, and reduce the speed/impulse of the motors.

Next Steps - The gearbox for printer motors is already in progress.  The initial results of that design are very positive. I will be replacing the motors in Tilt! with new gearbox driven versions.

This guy has a good page on balancing robots:  Axel's FYI Balancing Robot

And this video is typical.

Posted by Düsseldorf Doug at 1:33 PM No comments: