Time for A new Mojo Design!  Time to get back in to the wonderful world of Quadrupeds!

I am trying out a new design approach for a new Quadruped.  The 5-bar linkage.

This approach has been successful in several quadruped designs found on the internet. (one of my favorite is by Oracid: video.)

It has a full range of motion with only requiring only 2 servos per leg. in addition the leg linkages are supported by pin/hinges on the frame. This should reduce, but not eliminate the force exerted on the servo motors.

Linkages are just mechanical arrangements of bars/links/connectors and pivoting connections. Given different types of configurations, it is possible to get a wide range of applications. One of the most common linkage people have seen on old steam engines. Here, the steam exerts a linear force that is then converted to a rotational force to move the trains wheels.

For a 5 bar linkage, only two bars are connected to the servos. by changing the angle on just these two servos, one can get a wide range of motion.

For my design, I will be connecting the top two pivot points together to create a 'diamond' of the linkages.  next, at the bottom, the bar is extended further out. Here is where the 'paw' will be connected.

I am hoping that this arrangement of parts should provide significantly more vertical lift in the leg. Mojo2 did not have significant lift and often shuffled.  Also, Mojo3 had more left control, but the servos were overpowered. This combination should provide both the needed strength and lift required.

To control the leg, the two servos will be connected in smaller 4 bar connection to the sides of the Diamond. The key in the design is to keep the servo horns parallel to the bars that they control. In operations, the servos themselves act virtually identical to the top diamonds sides.

The linkage parts will be 3D printed (of course) and I will be using a small nail as the hinge.  This hinge arrangement is very similar to the track design I used on the Wild Weasel. (video)  Having a reliable design in the CAD and 3D printing makes building robots a lot easier. With this design I can remove a freshly printed part and assemble it with only basic smoothing and cleaning. 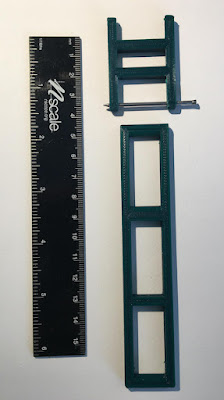 For my first rapid prototype testing, I will only have a test stand to validate the movement of the leg. I am re-using parts and the wiring from Mojo2.  I will reuse the Mojo2 servos, MG995 servos. These are 13kg servos. They are slightly heavy for this application at 65g.

Here is what the constructed leg mechanism looks like:

Next Steps:
Now that the basic structure is printed and built for the 'test stand'. I will work on the software to move the leg. For this robot, and the first for Mojo, I will implement some form of Inverse Kinematics. With Inverse Kinematics, it will be possible to instruct the leg the exact position it should talke, and the IK will determine the correct angles to command to the servos.
Posted by Düsseldorf Doug at 2:55 PM