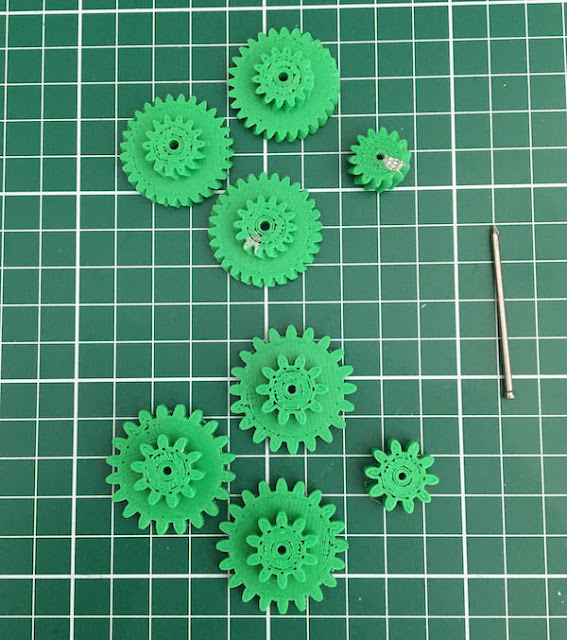 First version of Gear Design (above) vs. Current version (below)

Here are the versions changes from my initial gear design to the current one used.  The latest version has fewer teeth and is slightly wider on the smaller in-set gear.  This has required the housing box to be increased in size.  I used this extra design cycle to increase the distance between the axles in addition.

The Assembled Gearbox
unfortunately, you can not see the internal gears, because of the inclosing housing.  This design is working.  It seems to be good tork on the output shaft. The rotational speed is significantly less (~6:1) than the motor speed.  Even better, it will run without getting jammed.
The next steps will be to design in a method for securing the gearbox to the robot. This may be dependent on the robot it is being applied to. The gearbox increases the space required for the motors.  My robots tend to be small, so this will have significant impact.
In addition, I would like to remove the load from the output shaft using 8mm skateboard bearings.  Finally, the drive shaft will need to be adjusted to provide a better attachment method for the output.

Robot Application
Since 3D printed gearboxes are not the focus of my robot building, this initial disign is good enough for now to move forward.
The Milli Robot will be fitted with the new gearbox. The connection between the motor and the helix shaft has been problematic. The rotational rate was too fast. Frequent jamming (due to a broken stabilizer) resulted in the drive shaft burning out the drive gear. A gearbox and new stabilizer should get the robot development back on track.
Tilt!  A self-balancing robot will also be fitted with the new gearboxes. The original concept to use recycled motors, used the belts from the printers. The belt system is functional, but the fast movements required to provide balance created slippage in the belt. Typically slippage can be reduced or removed with a tensioner. However, I think in this caseitwoudl be best just to replace the belts with a gearbox system.  The drive mechanism is not the focus of this robot, therefore simpler is better.
Posted by Düsseldorf Doug at 1:00 PM