After the first prototype testing, it was evident that the 'drive gear' was slipping. This is the gear that is directly connected to the 3D printed gearbox. The gearbox itself may have some backlash (flex), but otherwise the system was pretty tight. It was just that the pressure from the leg mechanism was causing the gear to slip.

Here is a short video of the slippage

The fix to this turned out to be a simple change from a regular spur gear, to a helical gear. (the gear with a slant)

here is the original gear on the gearbox:

and the new CAD model (OpenSCAD) 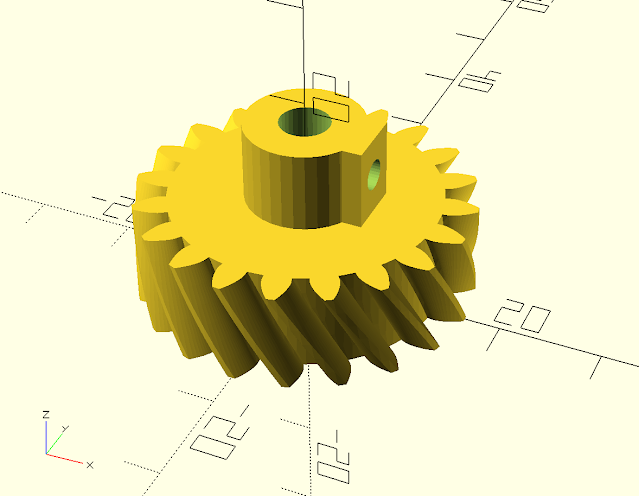 This gear design has additional surface area touching in the teeth of the gear.  This is all that was needed to improve the operations.

Helical gears are one type of cylindrical gears with slanted tooth trace. Compared to spur gears, they have the larger contact ratio and excel in quietness and less vibration and able to transmit large force. A pair of helical gears has the same helix angle but the helix hand is opposite.  (hkgears.net)

All and all, I will pause this development for the moment. The mechanism is not performing as well as I would hoped for this point in time. I may return to the design. But, for the time, I am thinking more about a more functional base robot - back to MinOne.

Posted by Düsseldorf Doug at 3:59 PM